This vegan pancakes recipe is gluten-free and egg free. It takes less than 30 minutes to make and is a perfect lazy vegan breakfast option. 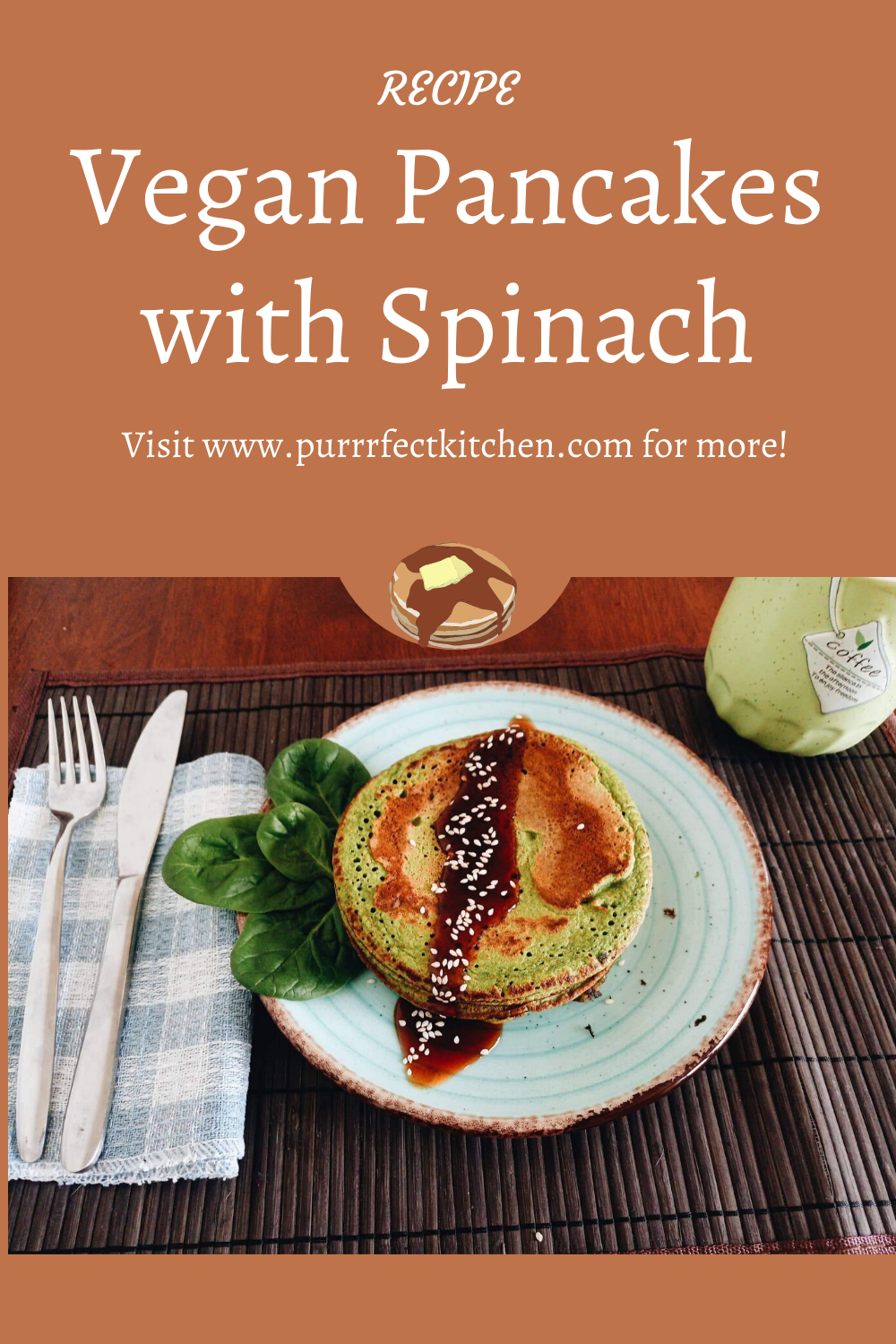 I love spinach in vegan pancakes, it adds a bright green color that makes them look magical. But when it comes to eating spinach on its own, for example in a salad, I do not like it very much.
I love eating plat-based meals! It feels more adventurous.
If there is a vegetable that I do not like (there are very few of them) I always try and figure out a delicious recipe for me. Spinach has such a rich nutritional value, you would not want to miss out on it 🙂
So far having these vegan gluten-free pancakes with spinach has been my favorite spinach recipe.
You can also make these vegan gluten-free pancakes with spinach for lunch or dinner!
What is your favorite spinach recipe? I am always looking for new breakfast recipe ideas.

Here is my vegan gluten-free pancakes with spinach recipe. This recipe consists of few ingredients and fits one bowl! 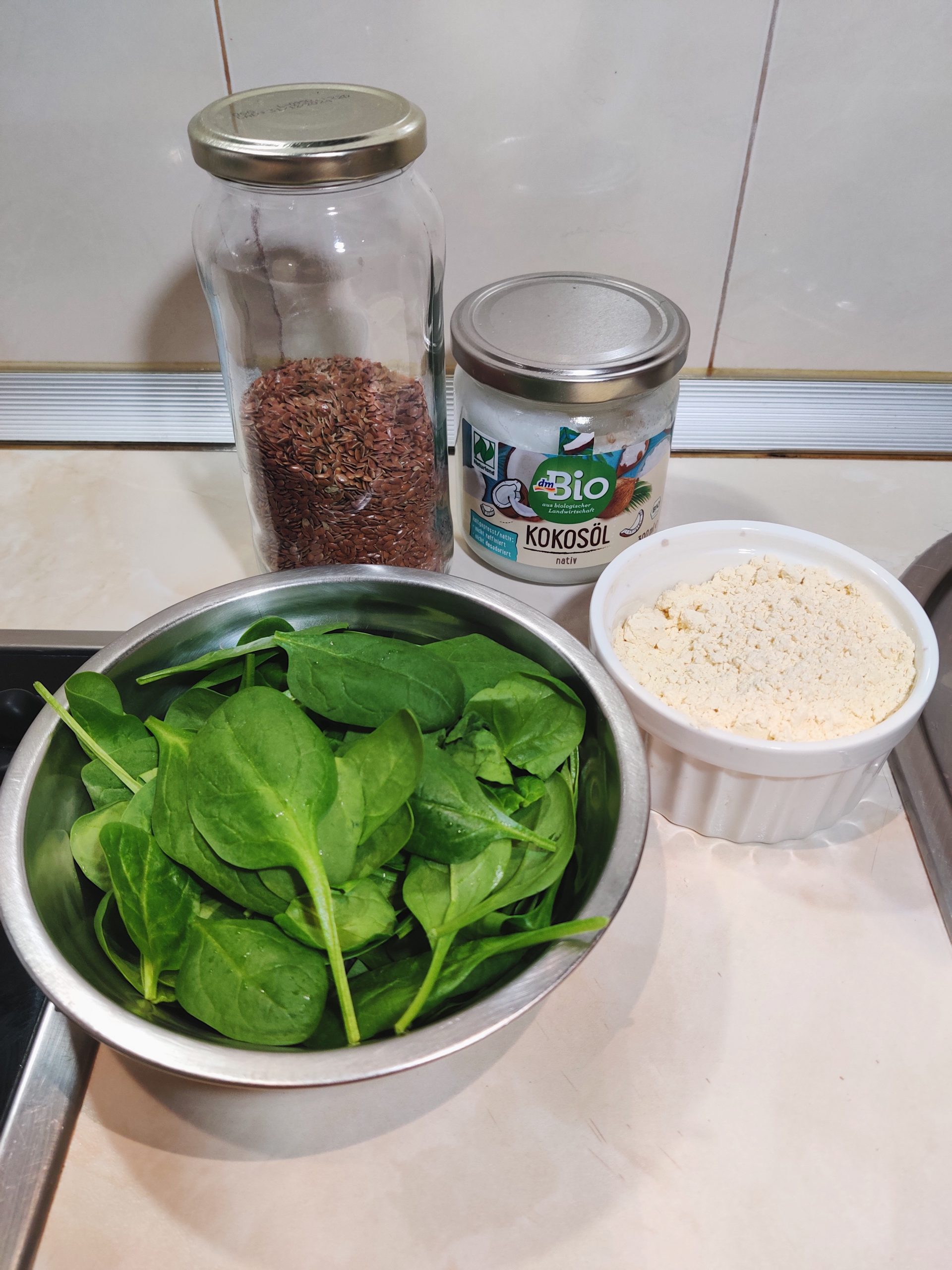 When it comes to cooking, I try to always use fewer kitchen utensils. Too many utensils crowd your work station. If you have limited space, you always move things around, and all the dish washing at the end of the day!…it’s a no no!
So yes, I am a big fan of one pot recipes or one bowl recipes!
While making vegan pancakes, I try to use only the container from the mixer, frying pan, and a spatula. And the mixer itself.

How to Make Vegan Gluten-Free Pancakes with Spinach

Step 1: First we are going to blend the spinach, with 100 ml of water.

Step 2: Now add a tablespoon of coconut oil, chickpea flour, some flax seed flour, water and a pinch of salt. 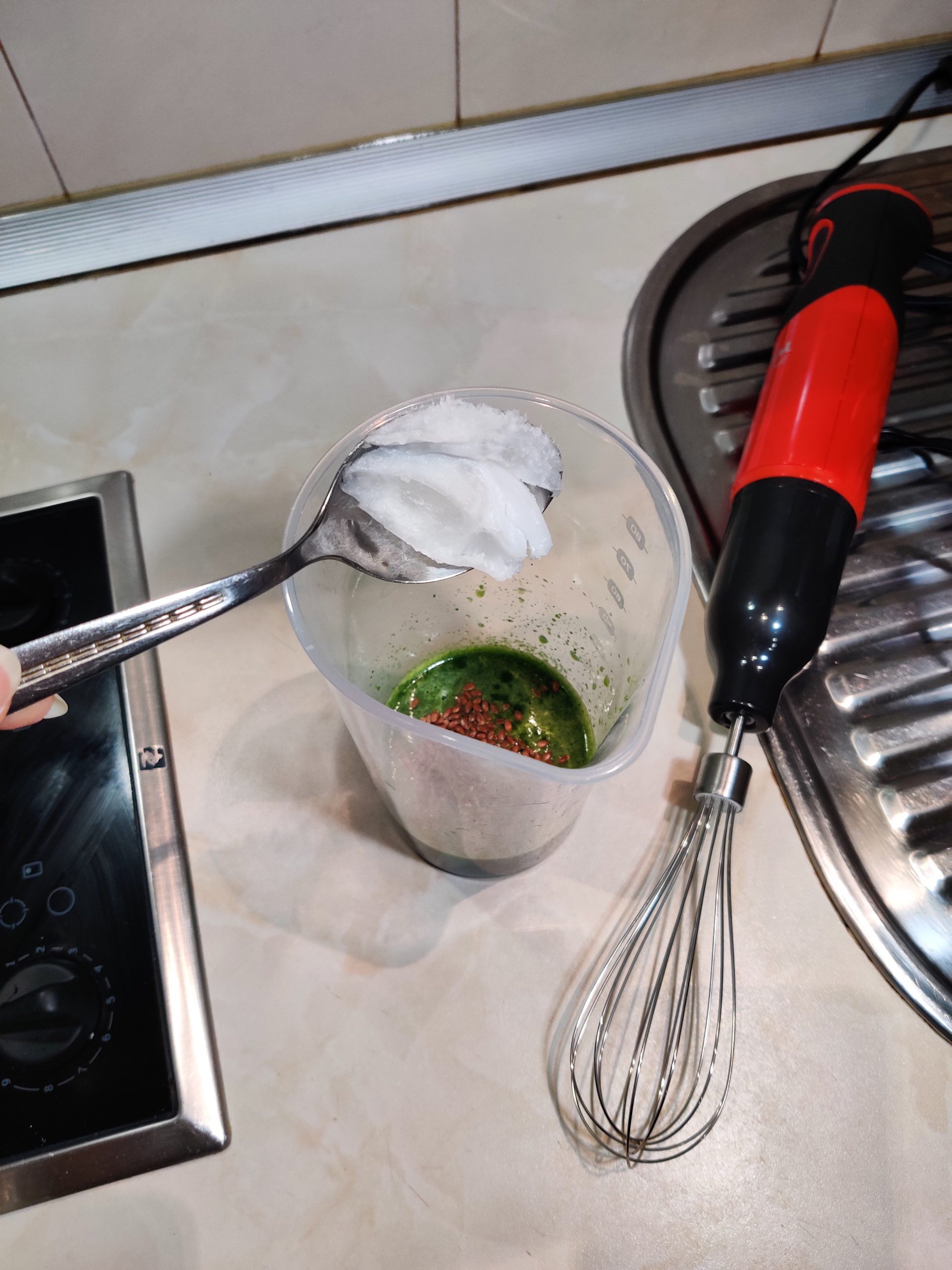 Ohh and I also added a teaspoon of baking powder to make them fluffier. 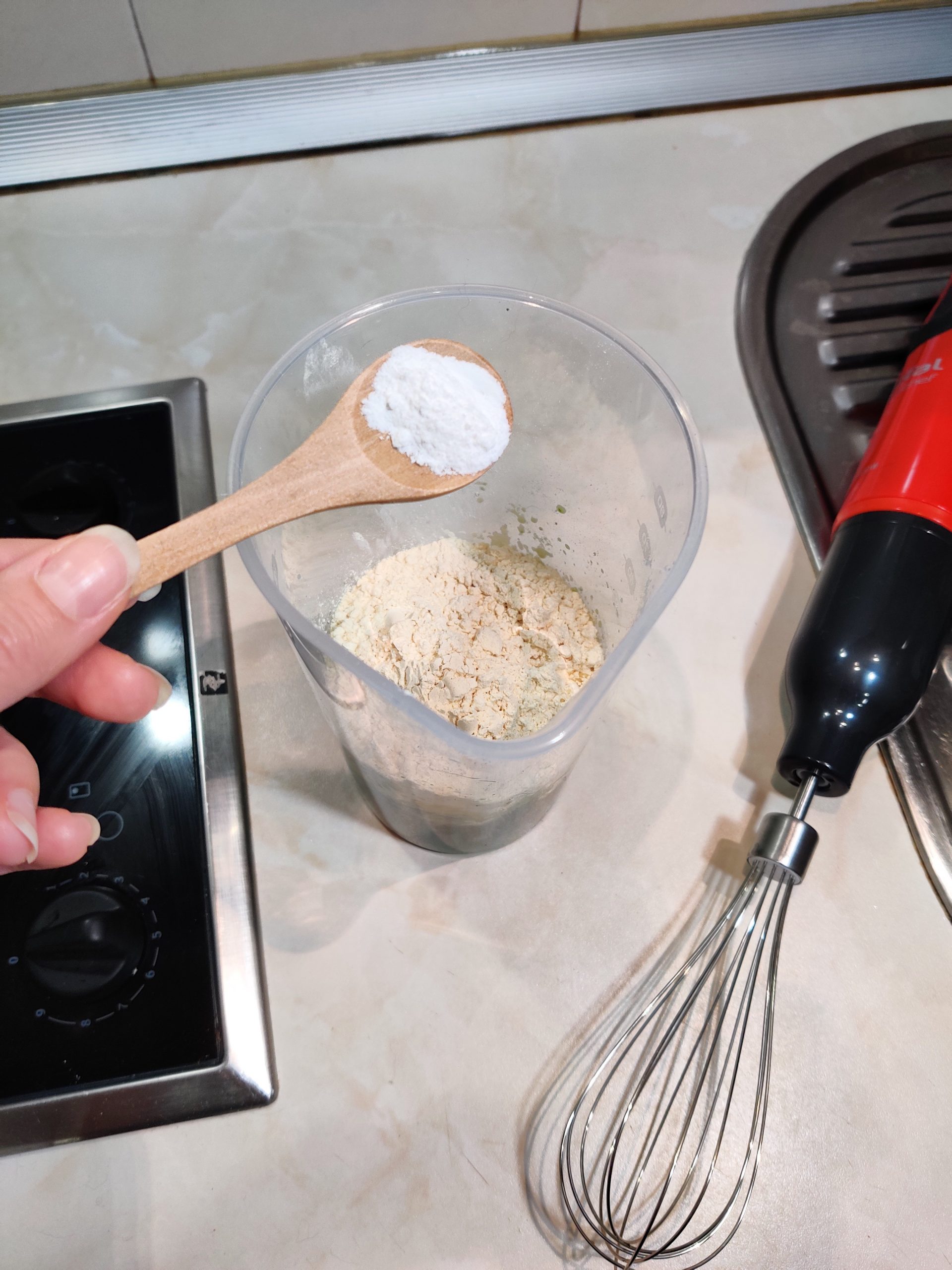 I wanted to use only chickpea flour, but, flax seed flour helped to create a firmer batter. More suitable for our vegan gluten-free pancake.
I also added a few whole flax seeds for extra taste, and crunch.

Step 3: Mix all the ingredients together, until you have a smooth consistency.

Step 4: For frying I used coconut oil, but you can also use olive oil.

Step 5: Pour the mixture into the pan, enough to have a fluffy but not too thick pancake. 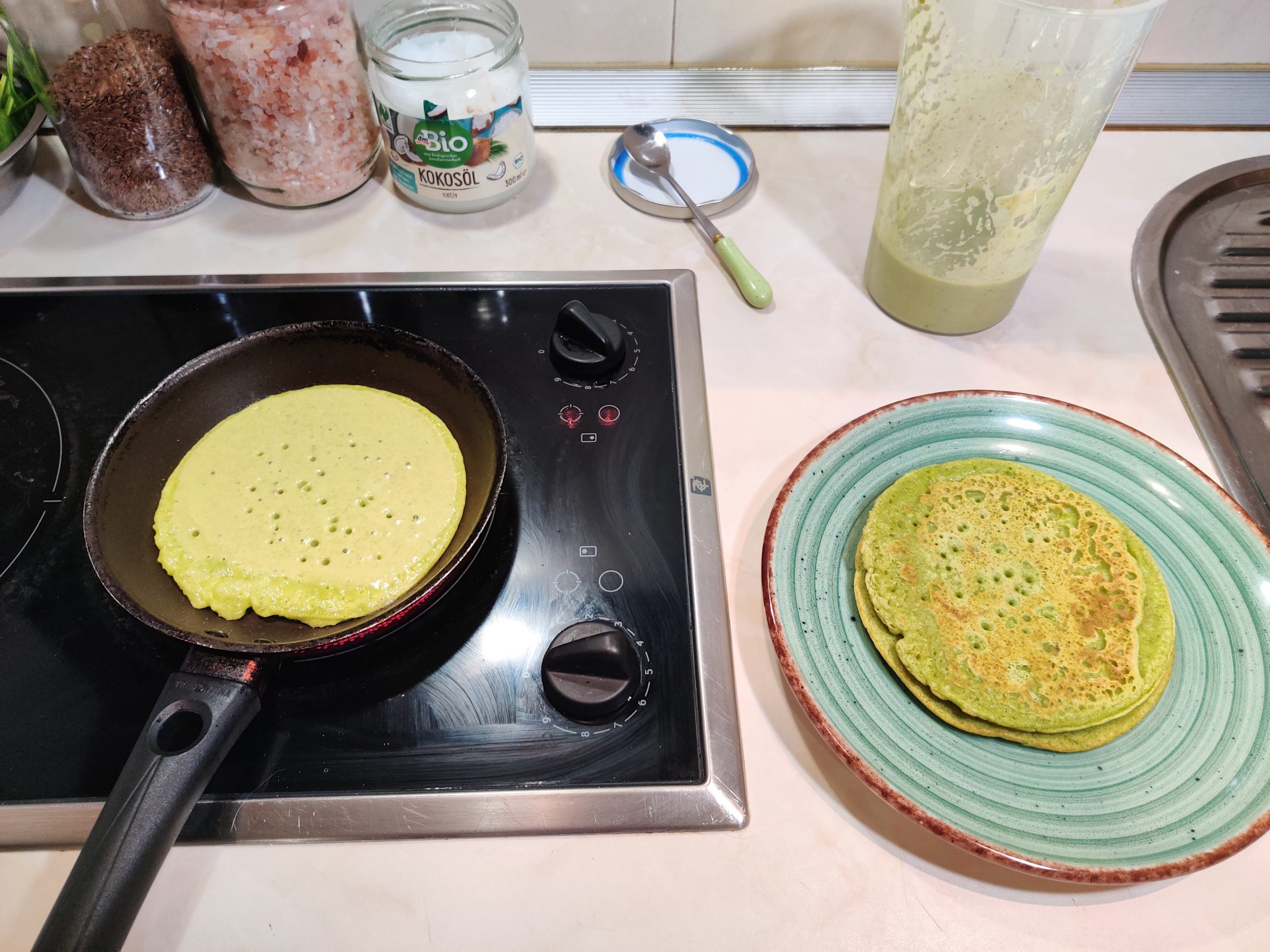 My goal was to make a mix between an American pancake and a French crepe. Small and fluffy.
This recipe is easy and quick to make. As a result, you get approximately 5 beautiful vegan gluten-free pancakes with spinach.

Voila! 5 Vegan pancakes with spinach in less than 30 minutes. 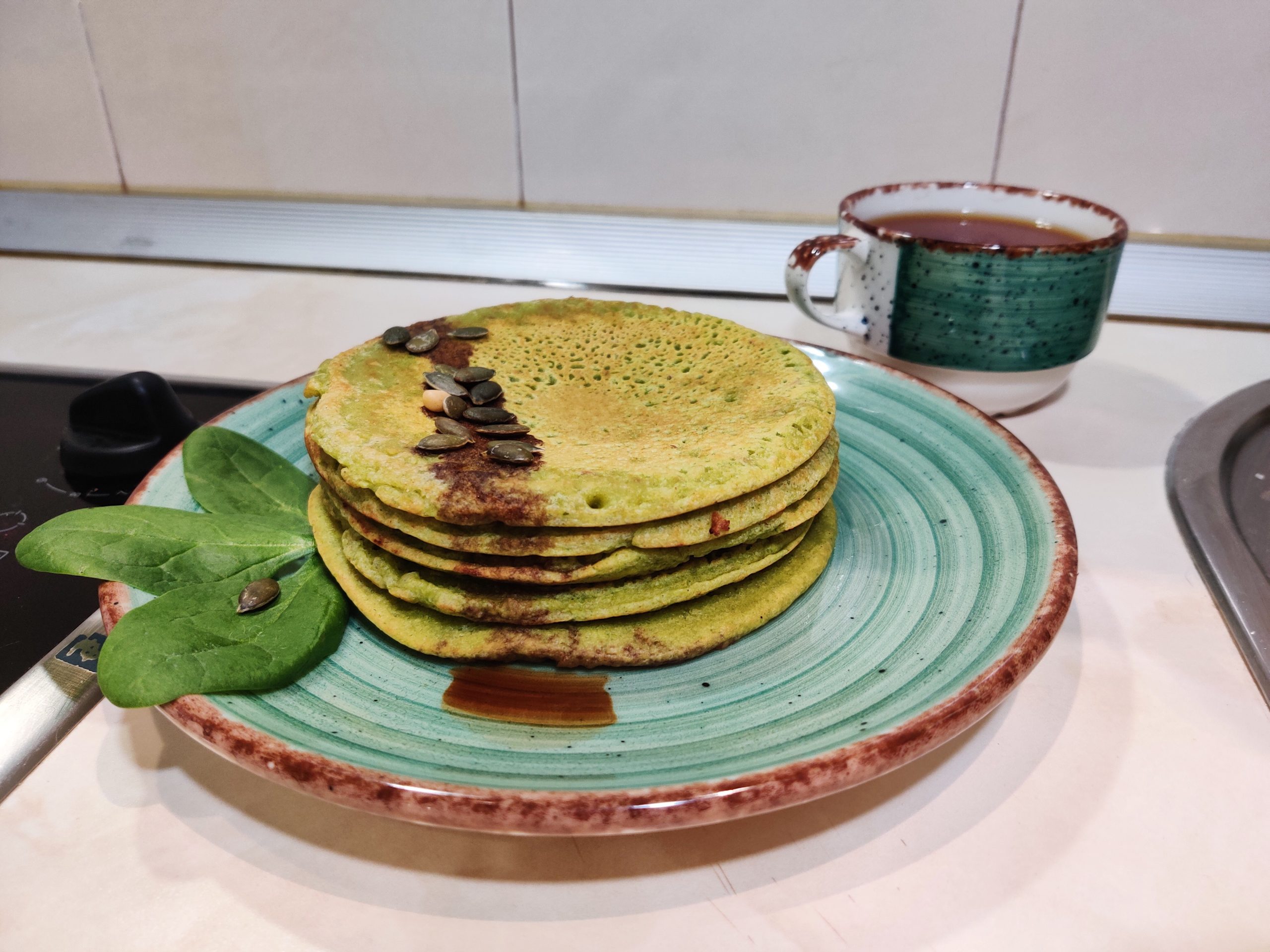 Check out my gluten-free vegan pancake recipe that does not have spinach! 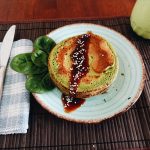